Michigan Lutheran Seminary's JV hosted the Vandals of Merrill on Thursday, September 17.  Both teams began by moving the ball right down the field.  Merrill had some sizable linemen who got a big push on our guys.  Their running backs got around the tackles for chunks of yards that kept moving the chains.  They also threw passes which usually meant success for them.

MLS, on the other hand, looked like we were going to move the ball with equal success.  Then in the first quarter, our starting QB, Adam Arrowsmith, was knocked out of the game with a concussion which he got while on defense.  Time to shift gears and work with the back up QB, Noah Nordlie.  Noah did a nice job of working the MLS offense.  Unfortunately, it also meant that we would not be passing the ball the rest of the game.  I am guessing that Merrill figured that out pretty quickly, making all of our drives thereafter pretty difficult.  Still, MLS had success moving the ball and put in some scores.

MLS was down 30-24 with little time left in the 4th quarter, when we took the Merrill kickoff for about a 40 yard return deep into Merrill territory.  Flin Breland was tackled by his neck on a vicious clothesline which was a TD saving tackle.  It also should have been a penalty, but the referees kept their flags in their pockets.

Nonetheless, MLS managed to get the ball down to the 1 yard line with seconds remaining and the clock moving.  With :01 (that's what the clock said), MLS tried to snap the ball and Merrill jumped offside (not really debatable).  The refs simply said the game was over because time had run out.  MLS fans felt like we were victims of some missed calls on that last drive.

Some photos are below.  Caleb's main role was blocking and taclking this game.  I think his blocking is getting better, too. 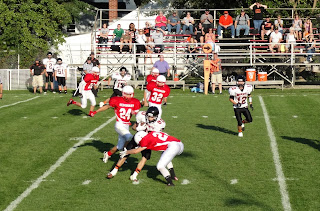 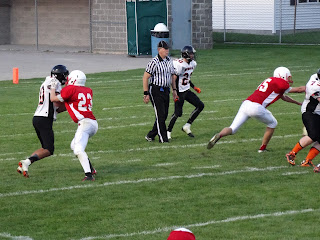 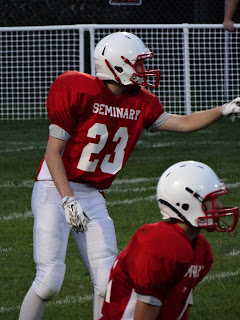 Posted by Pastor Thomas E Schroeder at 9:15 AM