Last night, the Michigan Lutheran Seminary JV Cardinals had their first home game, hosting the Carrollton Cavaliers.  The game was delayed by a storm that passed through shortly before game time.  Nevertheless, the game started only about 15 minutes late.

MLS got right to work, driving the ball down the field.  On the first play of scrimmage, QB Adam Arrowsmith threw a deep corner route to Caleb.  It hit him in the hands, but Caleb could not hang on.  Despite all of the good things he did later in the game, that is the play he remembers.  The Cardinals still drove down the field for a TD.

Later in the 1st quarter, with Carrollton creeping into MLS territory, a pass got tipped and Caleb DID catch this one for the interception.  He returned it for 20-30 yards before being tripped up from behind.  That drive resulted in an MLS TD as well.

MLS put up a 3rd TD before Carrollton responded with a long run for a TD.  Both added one more score, going into halftime, 28-14.

The 3rd quarter was all MLS, including a long TD pass to Caleb.  Caleb kept his body between the defender and the ball, and after he hauled it in, he turned up field to see only grass and the end zone.  The end of the 3rd quarter was 41-14.

It was nice to see a lot of the second string players get some decent playing time.  They played quite a bit of the 4th quarter.  So did Carrollton's speedy back, #18 (last name was Rodriguez, and we heard his name a lot!).  #18 broke two long TD runs in the 4th quarter to make things a bit closer.  The first string went back in to make sure we had a handle on the game.  But we failed to secure the onside kick, and Carrollton scored immediately on a long TD.  I remember thinking, "I'm afraid I saw this game last January in Seattle."

In any case, the first team got the next kickoff and ran out the clock.  But the final score went from a very comfortable 41-14 to a more nervous 41-32 win.  But a win is a win, and the boys will not have to be convinced that they still have work to do. 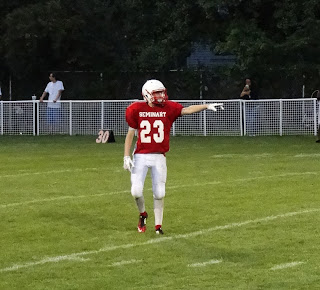 Posted by Pastor Thomas E Schroeder at 8:20 AM