Michigan Lutheran Seminary's Varsity team hosted the Bulldogs of St. Charles on Friday, September 11.  The St. Charles team came in with a pretty sizeable line and hoped to capitalize on that.  And while they moved the ball some, it was never enough to punch it in for a score.

MLS began quick with a long pass from Andrew Schroeder to Casey Williams.  I was in the corner of the end zone where Casey ran it in.  It was cool to see that pass arch down the field and Casey outrun the corner.  I think I was calling TD before Casey even caught the ball.

In the second quarter, the Cardinals got the ball down to the 1 yard line for first and goal.  Andrew usually goes from the shot gun.  When I saw him walk up to go under center, I knew the QB sneak was coming.  The Cardinal O-line got enough of a push to get him in for the TD.

The second half began with the Cardinals receiving the kick.  After Jordan Hayes muffed the kick, he ran to scoop it up.  Casey also got there, and Jordan let him have it.  All Casey did was run it back for a TD.  I think they drew it up that way.

MLS managed two more scores in the second half, including a fumble returned for a TD by Tristan Pankow (photo below).  The game ended with a 34-0 score.

You can take a look at a couple of plays of TV coverage here.  Scroll to the 4:06 mark for the MLS game highlights, which includes Andrew's QB sneak score. 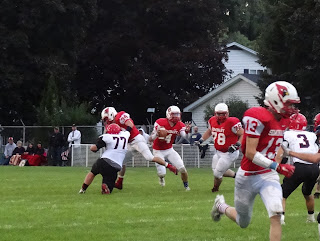 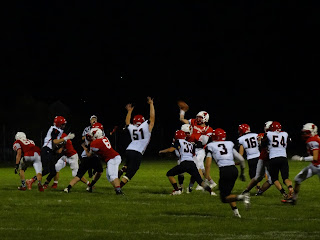 Posted by Pastor Thomas E Schroeder at 8:06 AM